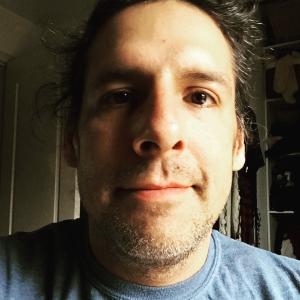 Mike Alexander is an emerging Anishinaabe visual artist and writer originally from Swan Lake First Nation in Treaty #1 Territory, currently residing on the traditional and unceded lands of the Tk’emlúps te Secwepemc. Adopted out to a non-Indigenous family shortly after birth, Mike is a 60’s Scoop survivor, a second-generation Residential School survivor who grew up in Winnipeg, having no connection to his community, language or culture until his early 20’s. He has attended the University of Victoria, the Victoria College of Art and the Vancouver Island School of Art. Mike is honoured to have received mentorship from master carver and recipient of the Order of BC Carey Newman (Kwagiulth) as well as master of the Woodlands School of Art, Mark Anthony Jacobson (Anishinaabe) who as a Pipe Carrier and Eagle Staff carrier, serves to transmit cultural knowledge as well as artistic skill to Mike to help guide him. Mike has been the recipient of several generous grants from the Kamloops Arts Council, the First Peoples Cultural Council and the BC Arts Council and is currently practicing as a full time, internationally collected artist. Since 2015, his large acrylic paintings have received four solo exhibitions in Vancouver, Victoria, and Kamloops as well as participation in several group shows across Canada and the United States.

Try-before-you-buy with a 3 month rental. 100% of your rental payments go towards the purchase (interest free). Message the artist directly, and start the conversation.

We make it easy for you to try art with smart payment plans and try-before-you-buy models.

See How It Works

Artwork protection is included on all art rentals up to $5K. Our Customer Care team is always here to help.

1% from every transaction goes towards a Canadian arts nonprofit.